The History of Bleating Heart Cheese 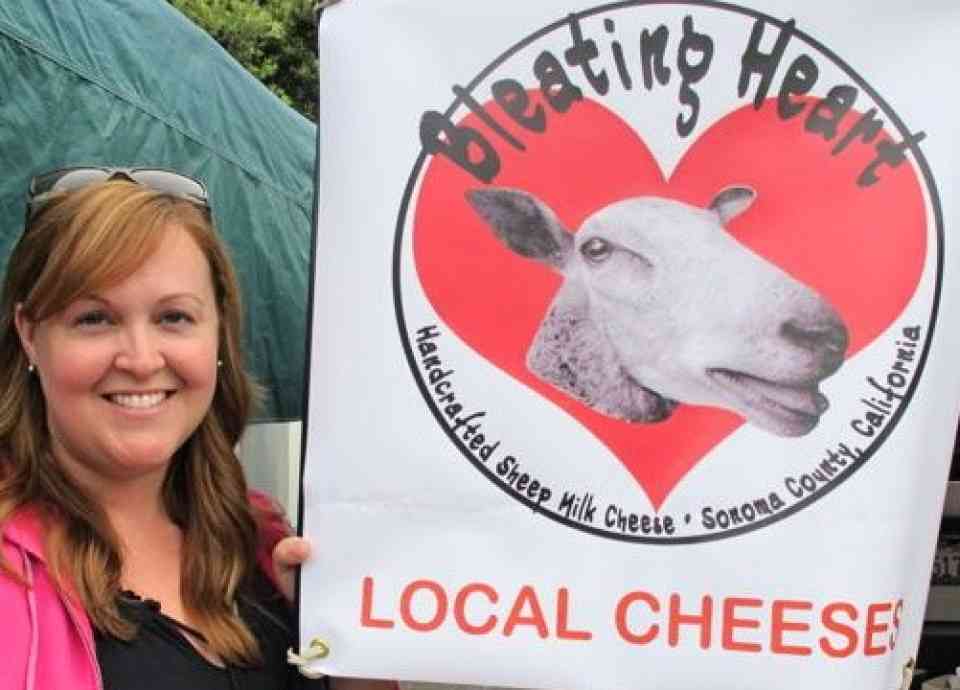 One problem - a big one - was that sheep milk was very hard to come by, because you could not just go to the store and buy it. This meant that doing any home kitchen test batches was not an option. The scarcity of sheep milk was by far the biggest barrier to entry for starting a business making sheep milk cheese, but Seana was on a mission and could not be deterred.

After many months of intensive research, travel and networking, Seana was fortunate to begin cheesemaking by buying milk from fellow cheesemaker Marcia Barinaga, who owns Barinaga Ranch - California's 4th sheep dairy - in Marshall, CA. Marcia's name appeared on LinkedIn when Seana searched on the word "sheep" just to see who might show up; Marcia was a 2nd degree connection to Seana's husband, Dave Dalton. As it turned out, Marcia and Dave had worked in neighboring laboratories at the same research institute 20+ years earlier, long before Seana and Dave had ever met, and long before Marcia or Seana ever had the crazy idea of making and selling sheep milk cheese....talk about a small world! Seana wasted no time getting connected with Marcia and within weeks the two had met and made plans for how they could help each other in what was the first year of cheese production for both new companies.

Seana gained a lot of experience helping in Marcia's new sheep dairy, and had a great time sharing Marcia's little creamery. During this time, Seana created Bleating Heart's most popular cheese, "Fat Bottom Girl." By the end of summer 2009, Marcia realized that she needed every precious drop of her flock's milk for her own delicious cheese, which meant she could no longer sell the amount of milk Bleating Heart needed to continue cheese production. Seana had a choice to make: stop making sheep cheese, OR, get some sheep.

In December 2009, Seana took the plunge and purchased a starter flock of dairy sheep. She bought a big truck on Craigslist, drove to Wisconsin and picked up 10 pregnant ewes from a sheep dairy in Wisconsin. These ewes were crosses between the East Friesian and Lacaune dairy breeds which are common throughout Europe. Seana and her husband Dave attentively cared for these ewes while they lived in the apple orchard in their backyard.  Despite the fact that Seana and Dave never sought to become farmers or raise livestock, they figured they'd better learn more about the animals that were living on their property! Dave enrolled in a sheep management class at Santa Rosa Community College, and Seana completed a intensive course in sheep dairying at the University of Wisconsin.

At the same time the sheep were on maternity leave in Seana & Dave's backyard, Seana was scouring the region looking for partners - people that knew more about farming and animal husbandry -  to start a sheep dairy on a real farm. Seana knew she could not possibly startup a new dairy and learn to raise sheep at the same time she was honing the craft of cheesemaking and building the new cheese business. With the help of a flyer Seana posted at the local farm bureau, she was connected with experienced sheep ranchers, Rex & Kerry Williams, owners of Williams Ranches.  These three sheep dairy enthusiasts met in February 2010 and soon after, Black Oaks Sheep Dairy LLC was formed, officially becoming California's 5th sheep dairy. The dairy became officially licensed and began milking those first 10 sheep in June 2010. By 2014 the flock grew to over 100 ewes and is still growing.

From the beginning, Rex & Kerry were responsible for the day-to-day care and management and milking of the dairy flock. Seana played more of an "as needed" supporting role in the dairy business, helping to closely monitor milk quality and had been an occasional relief milker when needed. Black Oaks Sheep Dairy is wholly operated by Rex & Kerry, and all of the milk their sheep produce is sold exclusively to Bleating Heart.

From 2009 through 2012, Bleating Heart had no creamery of its own. All of the cheeses were produced by renting time in other cheesemakers' facilities. During the first 3 1/2 years of Bleating Heart's existence, Seana made cheese in 5 different creameries in the Sonoma-Marin region. Also during this time, Dave became increasingly involved in the business and eventually became an equal partner with Seana. In 2013 Bleating Heart finally secured a more permanent home, moving cheese production to a newly renovated facility located on the historic Thornton Ranch in Tomales, CA. Another bonus of having the creamery located on the Thornton Ranch is proximity to more milk - both sheep and jersey cow. Bleating Heart wasted no time in contracting with Marissa Thornton to purchase all of the milk from her newly revamped dairy, Marshall Home Ranch, which is very conveniently located directly behind the Bleating Heart creamery.